The walk from St.Juan started with all sort of good feelings, which in reality were mostly a representation of my desire than of reality.

As usual, when I woke up at 6am, half of the dormitory was half gone already and the other half (except me of course) was busy with packing and repacking their belongings. I thought of  indulge in some laziness and let everybody out to enjoy the luxury of the toilet for me only. Also I wanted to rest as long as possible to ensure that the pain in the leg could soften. With my surprise, it felt very good and strong. Just a small hint of pain in certain foot twists, but I ingnored it believing that I could just proceed avoiding that particular movements. That was the first delusion.

The second was the outdoors temperature, which was highly overestimated. The dormitory was indeed quite cold, but given the previous glorious afternoon sunshine, I expected something like 13 degrees. When I finally packed and stepped outside at about 7:30am, the thermometer on the Albergue’s wall indicated 3 degrees! I was totally ignoring that St.Juan is 1080 meters high! The stars were bright in the clear morning air and giving a certain solemnity in leaving that tiny conglomerate of human dwellings along the road into the pitch dark. Given that Spain is on the same time zone as Central Europe, the sun rises this time of the year at 8:30am and the benefic warm rays do not become such before 9:45, at least at that altitude.

Maybe, in the effort to generate some internal heat, I may have accelerated the pace over the guard level, and by reaching Atapuerca, some 8 km past St.Juan, I sensed that the leg pain was far than healed but still quite bearable.

Is worth to mention that Atapuerca is the site of quite remarkable anthropological findings, where the ancestors of prehistoric settlements of humanoids were discovered and now is filed as an UNESCO site. The remains date over 90,000 years ago, and have ascertained that those early European ancestors, were cannibals. This may explain why it took so long and endless wars, for Europe to become an united entity, and to some respects, we are not there yet.

Longing for a breakfast stop, I entered in one of the many pilgrims’ bar y tenda along the way. Tenda stays for grocery shop, where I bought a bocadillo (sandwich), tomatoes and a peach, my usual diet for lunch.

With a refill of energy fuel I reached after a short while the summit of the Cruceiro, where I left thanksgiving stones in memory of my parents and also for my in-laws for having given life to my beloved wife. Nearby, as a contribution to a spiral-shaped spontaneous giant sculpture, I also left down a few well-wishing stones for some of my friends.

The city of Burgos appeared in the distance with its relevant contribution of noise and pollution. 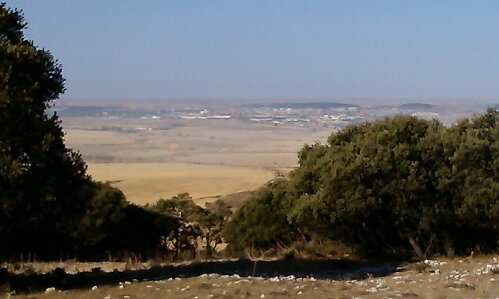 After a short while, the leg started burning internally very intensely and I had to reduce the speed considerably. The approach to Burgos is endless and very tedious and to make it more pleasant I chose the approach via the river.

For the last 7km, I was in agony and very concerned on the reason of the pain. The ankle and the lower right leg was now visibly swollen in comparison.

Once arrived in the Albergue, I managed to take a shower, wash my laundry with the help of Maria from Andorra, and than hop on a taxi to the nearest medical center.

Thanks God, I took with me the Italian Health Card that covers emergencies in the whole Europe territory.

In less than half hour, and without spending an Euro cent,  I have been visited and diagnosed with a tendinitis and inflammation of the nearby tissues. Prognosis: medications for 8 days and 3 days of rest!

Take it easy, I said to myself and decided to be reasonable and stay in Burgos one more day. Tomorrow will check any improvement and eventually decide what to do.