I am writing from Spain whose border was crossed today through the Lepolder Pass in the Pyrenees. It has been a very long stage with an elevation of about 2,000 meters. I am very tired and ready to go to sleep at 8:30pm. So I will try to take some picture of this amazing place dated back to the year 1000 and involved with the religion war by Charlemagne against the Saracens. It is now the arrival point in Spain of all the pilgrims from all over the world. During the walk today, I was surrounded by over 100 people doing the same effort and coming literally from all world countries, many Japanese, Koreans, South Africans, Brazilians and so on. It is the most energetic group of people I have ever seen.

We started at 7:30 after breakfast in the Auberge in St.Jean, served by the owner Mrs Daniele and her very vital voluntary assistant Keiko, a Japanese playing many instruments.

The climb was almost immediate and the valleys were full of clouds in the early morning hours. 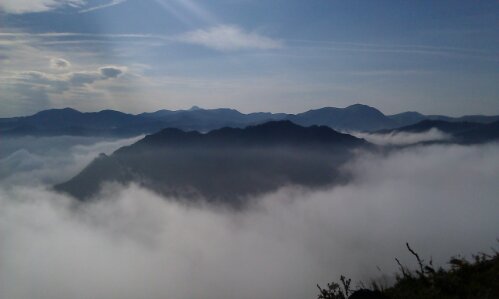 Soon the sky opened on a scenario of total freedom with horses, cows, sheep and humans coexisting and happy to be there at once.